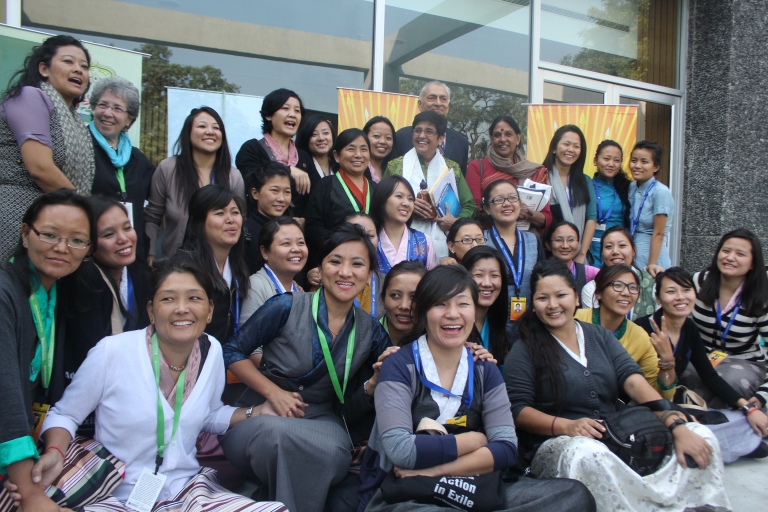 The general notion of feminism in the Tibetan community is that it is a western import.   It is therefore scoffed at as “white feminism” – one that is unwelcome and struggling to find its footing on the Asian turf. In the general Tibetan discourse, feminism is seen as women coming together to stage an unwarranted battle of the sexes to deepen the social divide between men and women. A Facebook friend of mine who refers to himself as a patriot once commented on a link I posted. It read, “these burning feminists are good at turning their harmonious families into ashes!” Besides the hostile nature of the comment, what really bothered me was the fact that it came in response to my post about an interview I did with Radio Free Asia on women’s political representation in the Tibetan community in exile.

Any engagement on gender issues is always tied to the narrow perspective of feminism as merely “fighting for women’s rights.” The counter-argument posed in any discussion of feminism is, “When Tibetan women enjoy all the rights already, what is there to fight for?”

The central point missing in this argument, however, is that a mere false projection of a society where men and women enjoy equal rights does not undo the internalized, embedded gendering that has become part of the everyday experiences of women around the world. What we need to realize is that the misunderstanding of feminism as anti-man and as the exclusive domain of women is an inaccurate caricature that only further deviates from the achievement of gender equality. The misperception that gender equality already exists in our society obscures the very real gender biases and sexism, which in the long run will only create greater barriers to individual and collective action.

Gender Inequities in the Tibetan community:

Much of the gender-based discrimination in the Tibetan community is rooted in mythological and religious beliefs that are inherited from ancient traditional and historical practices.

As a native speaker, I see the Tibetan language as being highly gendered. The word for woman in Tibetan, for example, reads as ‘keth-men’ which translates to ‘lower-birth.’ Although we do not have an accurate historical account or a linguistic record of how that word came into being, it does bear a religious connotation; it is believed that “a woman’s body is impure because of puberty, and more susceptible to suffering than that of a man because of the pain endured during labor and the vulnerabilities associated with a woman’s body. Based on this reasoning, women are not allowed in many spheres of Buddhist rituals and practices because of their “impurity” and “lower-birth” status.

Religious influence often determines the construction of language, and in the Tibetan context both the religious and linguistic aspects are highly gendered. Another example being the Tibetan word for “female,” which is “buth-meth,” the etymology of which refers to the fact that the female reproductive organ does not protrude (out) like the male organ. The linguistic gap in regard to gender issues is palpable in the Tibetan language, as we still do not have an exact, agreed-upon Tibetan word for gender, feminism, or sexism. Depending on the speaker, these words and their meanings are ever-changing.

A common Tibetan profanity bears a metaphorical meaning which compares a woman to a drum, wherein the harder you beat it, the louder the noise it makes. The critical influence of language on shaping cultural norms is apparent when such metaphorical tools serve to justify forced penetration, therein encouraging male aggression and dominance during sexual intercourse, including marital rape.

That Tibetan culture and society is heteronormative and rooted in patriarchy is undeniable. The common belief and expectation in Tibetan families is that the daughter will eventually become a daughter-in-law. As such, the word ‘nama’ (daughter-in-law living with the husband’s family) is common terminology in mainstream Tibetan discourse. Tellingly, the word ‘Makpa,’ son-in-law living with the wife’s family, is rarely, if ever, used.

Moreover, in our exile society, women are expected to marry and produce more than three children in order to fulfill their patriotic responsibility and contribute to the continued growth of the Tibetan nation. The Tibetan understanding of queerness, the possibility of various gender identities and expression, cisgender,, transgender, gender non-conforming, and gender non-binary — is, thus, limited. Indeed, the general, deeply-ingrained understanding is that such identities simply don’t exist in Tibetan society.

Last July, while on a pilgrimage with my family to the highlands of Ladakh close to the Tibetan side of the border, I saw a life-sized billboard placed at an entrance to one of the oldest Tibetan Buddhist monasteries in Ladakh. The sign read, Ladies wearing pants are not allowed inside the Monastery. I was shocked by this message and couldn’t help but question the chauvinistic dictum — that ‘ladies’ (but not ‘gentlemen wearing pants somehow serve as objects of irreverence in our sacred Buddhist sites.

Thankfully, despite the grim circumstances for feminism and queerness in Tibetan society, one illuminating figure is our Tibetan spiritual leader, His Holiness the Dalai Lama. His Holiness has consistently championed the cause of women and gender justice across the globe and has been instrumental in the empowerment of Tibetan women (including nuns) in exile. At his ‘International Freedom Award’[2] acceptance speech, His Holiness made a comment “I call myself a feminist. Isn’t that what you call someone who fights for women’s rights?”

Another important spiritual figure who has been especially vocal in his support for gender equality is the 29-year-old Gyalwang Karmapa a staunch advocate of women’s empowerment. At a public talk recently held at Princeton University last April on ‘Buddhism, Environment and Gender Issues’, the Karmapa said,“Women’s rights are a reflection of the degree to which everyone enjoys basic human rights.” In his book[3] His Holiness the Karmapa makes a bold revelation in the chapter on ‘Gender Identities — It’s all in the mind,’ stating that “not everything in Buddhist institutions is perfect, and this is certainly the case when it comes to gender discrimination.” During a private discussion, in which I had the opportunity to participate, on the topic of gender issues, the Karmapa made a historic pledge to avoid using the word ‘keth-men’ due to it’s derogatory nature.

With two of the leading Buddhist feminists advocating the rights and freedom of women and calling for gender justice around the world, Tibetan feminism does stand a clear chance to thrive.

Women in general often suffer reprisals when they speak out about gender equality and feminism in our society. I, too, have personally not escaped the wrath of Tibetan patriarchy. As a women’s rights activist in our (cis)male-dominated Tibetan society, I have, admittedly, faced it all — the criticism, rejection, harsh judgment, shaming, unfounded accusations, and public discrediting for my outspoken and refusal to stay silent in my community, thus earning the wrath of angry Tibetan men who are on the offensive.

A few months ago, I saw a public comment posted by a Youtube user called “Tibet King” on a video released by the Central Tibetan Administration (CTA) on http://www.tibetonline.tv.[4] The video is an edited version of a panel discussion called “Prevention of Sexual Assault in Tibetan Community.”[5] I participated in this public discussion along with Tseyang Minyaktsang[6]in which we spoke at length about how sexual violence perpetrated against Tibetan women, particularly against minors, by Tibetan men not only violates the law of our host country, but undermines the very foundation of Tibetan culture. The Youtube user’s comments directed against me read: “Today she is dividing between genders and tomorrow she will take another topic to divide Tibetan society.. What results has she produced in Tibetan society due to her ‘ass hole’ workshops and lectures…Looks at the gals who follow her and listen her lectures..In the name of women empowerment they now consume alcohol, go to disco pubs, smoke, divorce and many even hesitating to marry. Fuck Dadon Sharling.”

We simply cannot remain oblivious to the internalized gendering and paternalism that abounds in such rhetoric. This comment, disguised in nationalistic undertones, is one of many blatantly sexist comments that is constantly directed against Tibetan women. There is no reason why a woman who chooses to live her life on her own terms is somehow antagonizing men so much that it requires them to moralize on the failings of Tibetan women.

There is nonetheless, a light at the end of the tunnel. I firmly believe that the scale of the backlash against us Tibetan feminists only reflects our growing visibility. This should reaffirm our commitment and conviction to continue working together to achieve gender equality in our society. We must carry on this uphill climb to strengthen the core of Tibetan culture. Feminism is meant to end gender discrimination and ensure equality of the sexes –not to privilege one gender over another. It, thus, requires the participation of both men and women (and all those in between or outside of this gender binary) to engage in this crucial work. The optimist in me sees this happening on the frontiers of Tibetan feminism.

[2] Award presented to His Holiness by the National Civil Rights Museum on November 23, 2009.

[4] Web TV of CTA, operated by the Department of Information and International Relations.

[6] The then coordinator for Women’s Empowerment Desk, Department of Home, CTA.